Dear Friends,
How many of your newsletters since the inauguration have included quotes from Amanda Gorman’s “The Hill We Climb?” This one will be no different! I was so moved by all the official events on January 20th and I hope it gave you all some hope that change is on the horizon.
I’ve recently become addicted to dance and music videos on TikTok (I know!) and one of my favorite escapes are the ice skating videos by Elladj Balde. I highly recommend his skating to these opening lines:
When day comes we ask ourselves,
where can we find light in this never-ending shade?
The loss we carry,
a sea we must wade
We’ve braved the belly of the beast
We’ve learned that quiet isn’t always peace
And the norms and notions
of what just is
Isn’t always just-ice
And yet the dawn is ours
before we knew it
Somehow we do it
Somehow we’ve weathered and witnessed
a nation that isn’t broken
but simply unfinished
We the successors of a country and a time
Where a skinny Black girl
descended from slaves and raised by a single mother
can dream of becoming president
only to find herself reciting for one
Here are a couple sections of Ms. Gorman’s poem that spoke to me about the work we are doing.
“The hill we climb
If only we dare
It’s because being American is more than a pride we inherit,
it’s the past we step into
and how we repair it”
….
“When day comes we step out of the shade,
aflame and unafraid
The new dawn blooms as we free it
For there is always light,
if only we’re brave enough to see it
If only we’re brave enough to be it”
So many of my colleagues in the nonprofit space are dedicating themselves to understanding the role they/we have played in the present we have created and how to best step into that past and be brave enough to see it, be it & repair it.
MaineShare continues to be inspired by the difficult and slow work of our membership and the support of all of you. 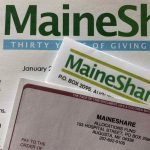 In this newsletter, we also announce the distribution of almost $130,000 to our member groups.  Read more.